When it comes to engagement metrics, of all the Instagram filters, it’s the “Mayfair” filter with its warm pink tone and subtle vignetting, that is the most effective. – Aubrey Chernick 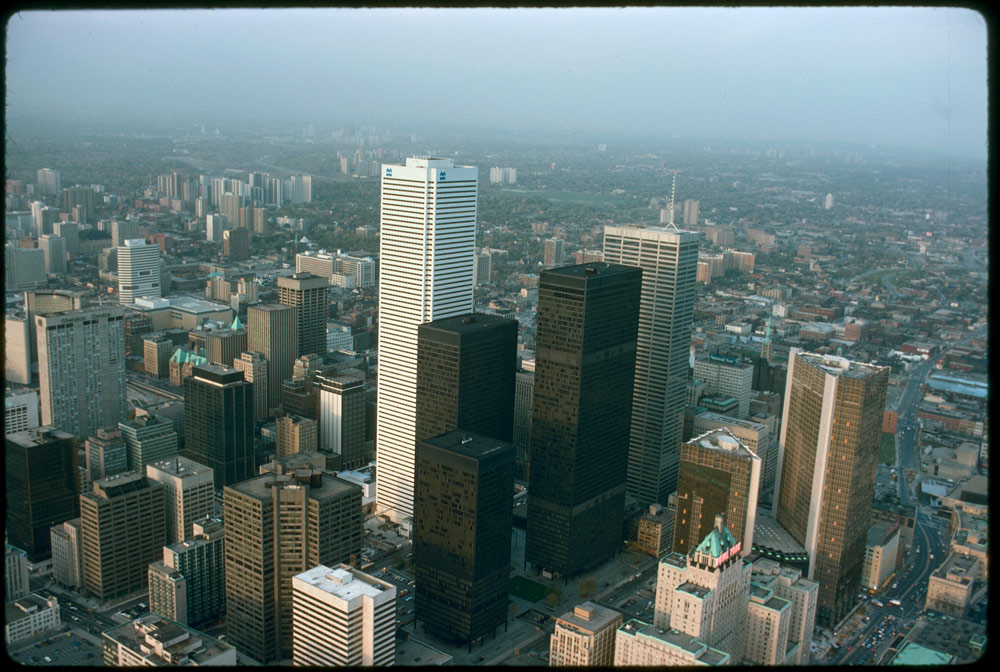 Now in December 2014, even more new Instagram filters were announced. But could it be that some filter effects created way back in 1976 in Toronto, Canada, have still not yet been implemented by Instagram nor by the Apple iPhone6 photo app? – Aubrey Chernick

This is a story of how these Canadian special effects were created on one Sunday afternoon. 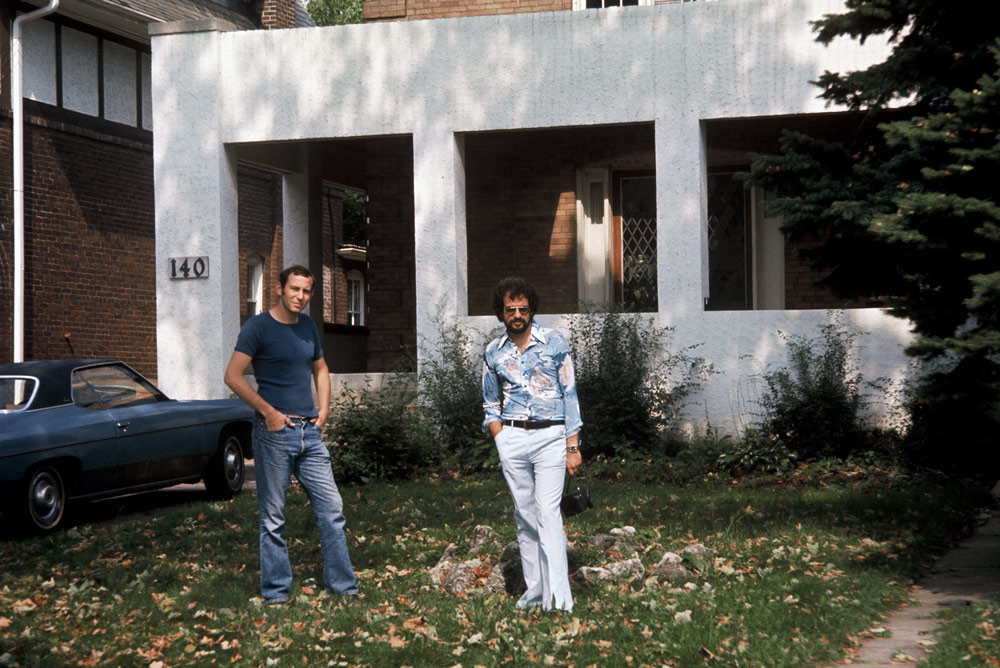 True, this all looks like throwback Thursday and a mini version of “Friends.”  I had moved to from Winnipeg to Toronto and then on to a mining town north of Toronto where I worked as a systems programmer. I yearned to get back to “T.O. The Good” or “Taranna” as Canadians would affectionately call Toronto. In the spring of 1976 I was visiting downtown Toronto around lunch time when I happened to meet Mel Kurshner (on the right). He invited me to a party that weekend — and I met the “Friends” from Toronto! That’s Norm Katz on the left. 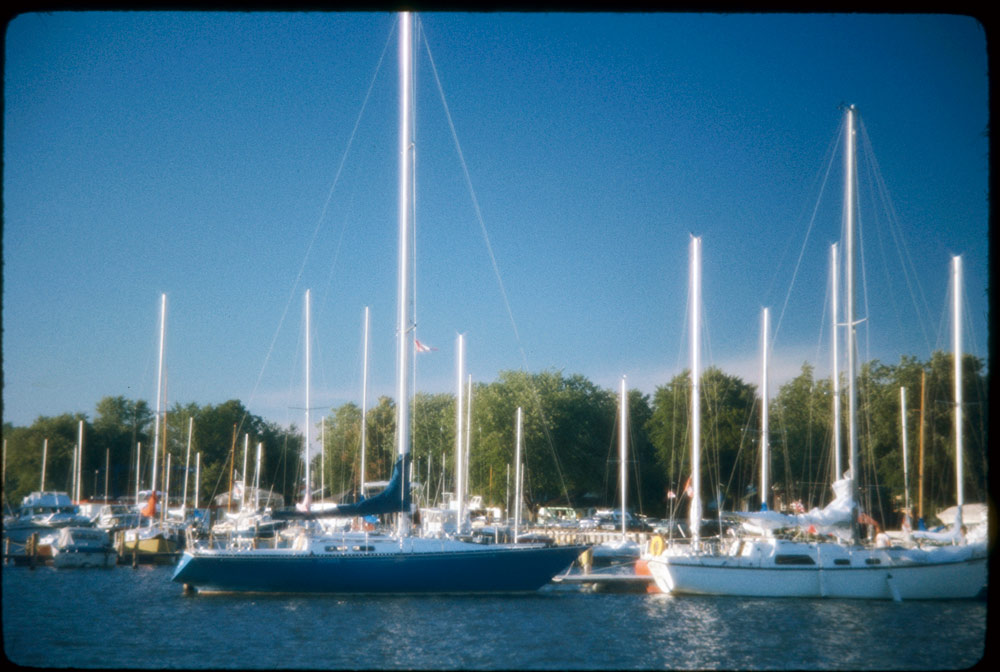 That summer, Mel invited me and a few friends to go sailing in his small sail boat he had bought the year before. I don’t remember if the camera I used was my old Pentax or a new Nikon, but I do remember that I had just started to explore the use of filters. I was amazed at the dream-like effect that occurred on these images. IMPORTANT: you should know that none of these photos underwent any post-processing. I only used off-the-shelf physical filters on my lens.
Now regarding the filter effect, I want to see if YOU can guess what filter effect I am using here! 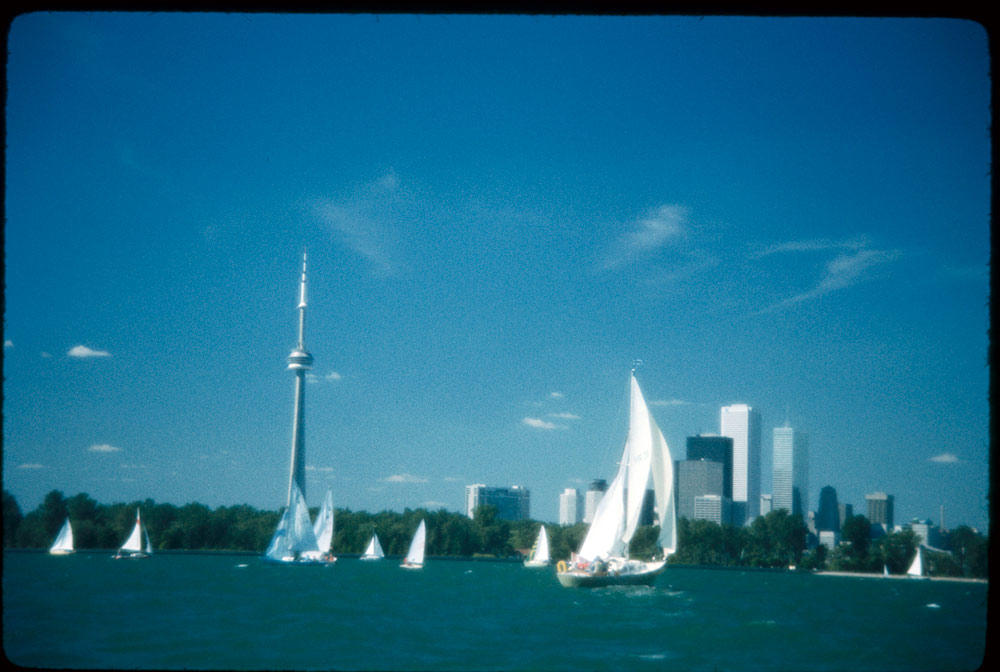 As you can see by the frames around this images, they were all scanned and converted into digital format. I actually like how you can still see the rough edges of the film border. Below is the standard shot of the iconic CNN communication tower in Toronto.

I know some of you think you know the answer to the photo filter, but you may not know the rest of the story. 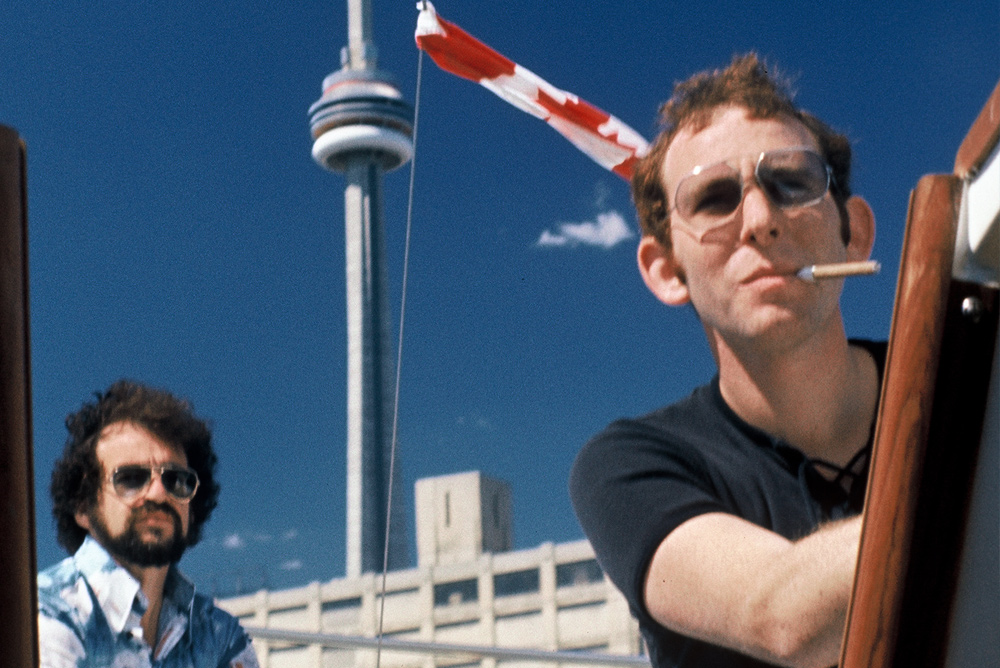 Norm and Mel ran the operation. Of course I was in charge of photo operations.

“But wait — there’s more.” Do  you notice another effect? Not just the softness of the image, but there is an eerie, dream-like, almost mystical look to these images. 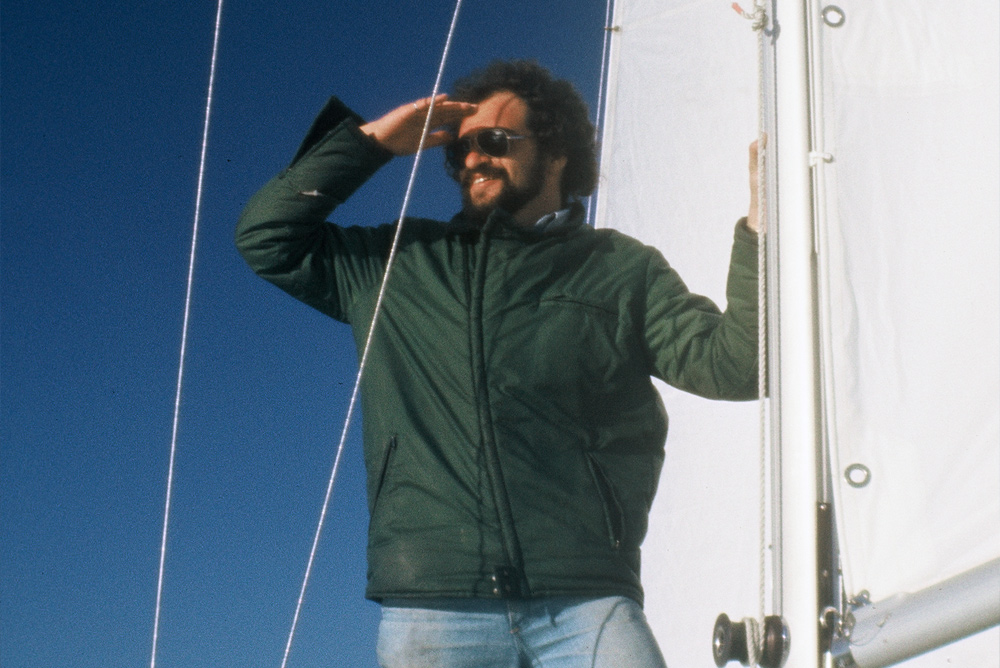 Here is Mel at the lookout!

I actually used not one but two filters here. Can you guess what the second filter I used beyond the polarizing filter? 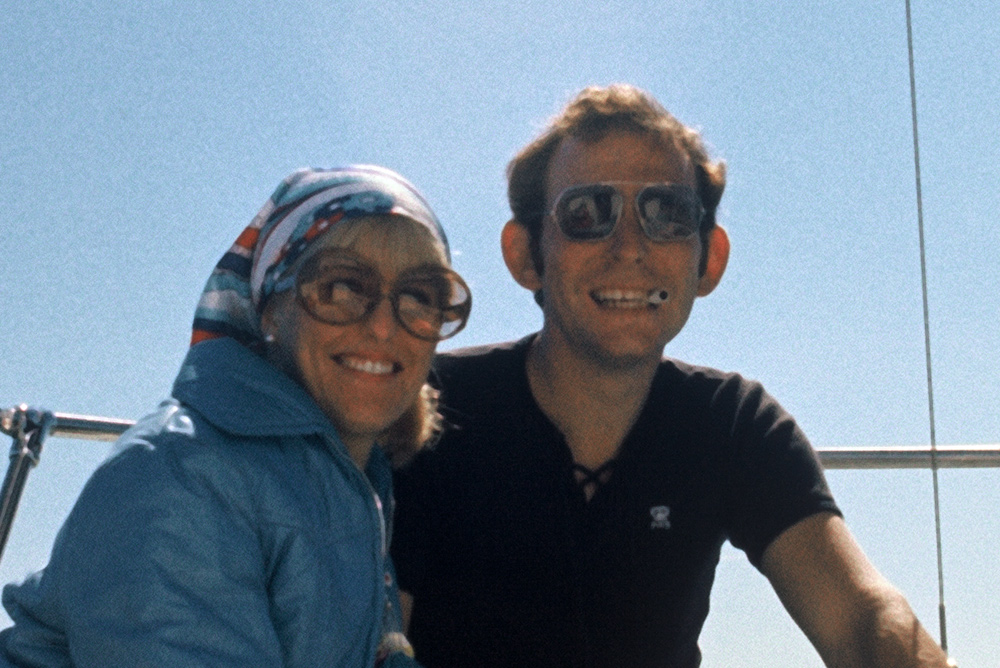 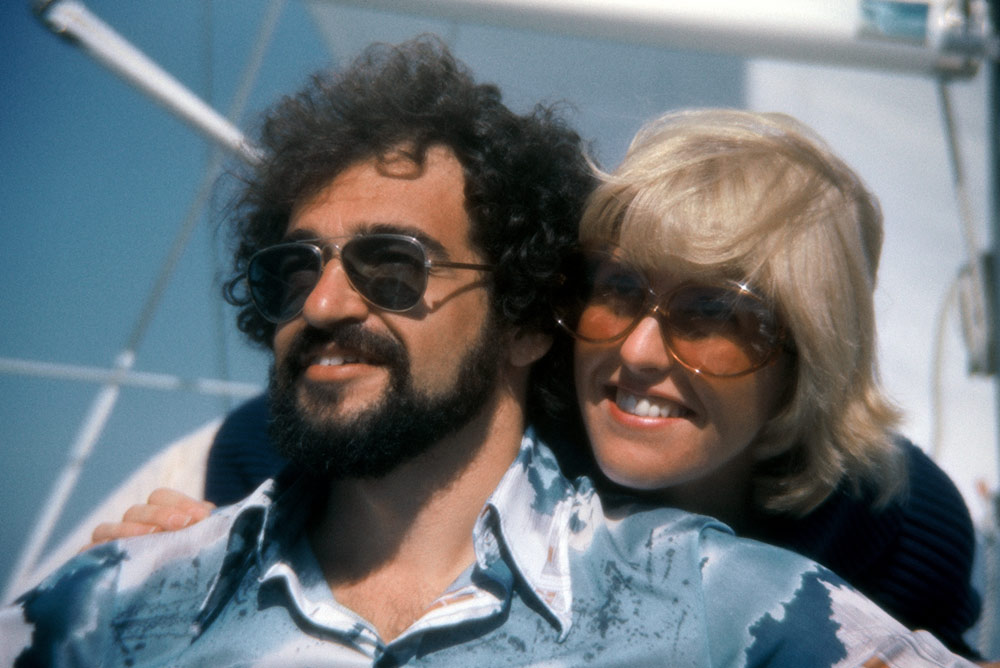 Depending on your age, you may or may not understand the secret that is unlocked above. Look at Ruth’s sunglasses. Notice the sparkle on the top right. That’s created by the second filter which is called a “Cross Star Filter” ( Amazon sample here).

It was the combination of the Cross Star filter PLUS the polarizing filter that created this fascinating mystical, dream-like look. None of this was by design. It wasn’t until I had the film developed by the lab that I was actually able to see what the result was! 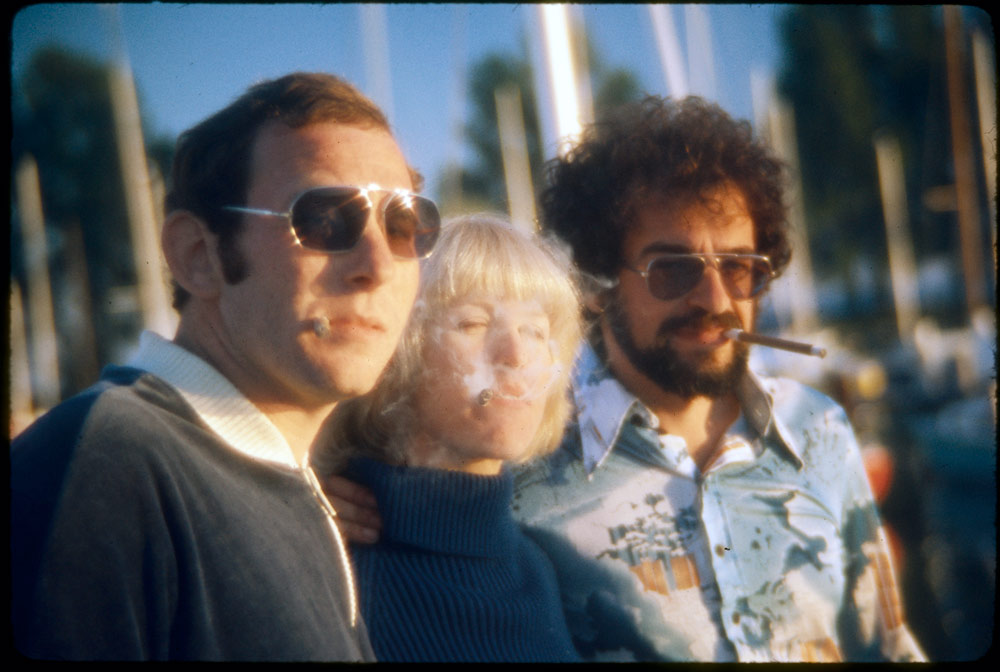 Finally, the end of the story.