Joyce and I are pleased to support the LA Opera’s 2014 production of “La Traviata” featuring Plácido Domingo singing the baritone role of Giorgio Germont.

We recently attended the LA Opera’s 2014 Gala that kicked off their 2014/2015 season, and featured the season premiere of “La Traviata.” Actress Kate Walsh of hosted a pre-opera cocktail party, and she was kind enough to take a photo with me.

From the Los Angeles Times article:

The reception: Kate Walsh of “Grey’s Anatomy,” “Private Practice” and the upcoming series “Bad Judge” served as official hostess of the pre-opera cocktail party, where she talked of growing up with opera. Coming from a family of opera aficionados, which included a grandfather who sang light opera, Walsh said, “We’re all such big opera fans that my mother named her dog, ‘Puccini.’” […] 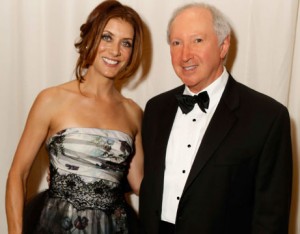 At the LA Opera Opening Season for 2014